SAFIRE Visit the SAFIRE Biography page. Click Here.          1998. It’s a packed house in a small club filled with a crowd in their early twenties and late teens. Like any other night, the crowds know they are there to dance, mingle, drink, exchange phone numbers and who knows, even get lucky. Tonight they know that some where down the line there will be a performance by some woman they have never really seen in person before. Just another one of those "Freestyle" people. As the hours go by, the place is filled to capacity as everyone gets into his or her nightly routine. As the majorities have forgotten about the up coming performance, with one big swift the lights and music come to a complete stop.

The crowds start yelling in anticipation. They think there was a power outage. The anxiety fills the air, as the crowds are unsure of the situation.

In New York, the label that is presently known as Cutting records, was back then already put on the map by its first release Hashim’s "Al-Naafiysh (The Soul)". Though Hashims record serves as proof of Cutting records and Freestyle’s roots to Electrofunk and HipHop, it would be Cutting’s next investment,  that would until this day grant them the tittle "Latin Dance Capitol".

Around the mid through late 80’s, the people spawning the Latin HipHop or Dance (as it was called), were mostly independents  from various different labels. Out of all the labels only two labels would become the mega forces of New York’s "Traditional"

Latin HipHop. They would be Cutting and Fever Records. It would be the camaraderie between the two, and everything between, that gave life to the Freestyle movement. It gave a sense of unity and "Family" to the producers, artist, singers, and DJs of that time. The same feeling would spread to Miami and Los Angeles, not only felt by those inside the Freestyle Industry but those outside in the public as well. Something that is indescribable and really had to be lived in order to be understood. Although many artists had their positions or tittles, there would be one who solely carried the heart of the movement that once was. A string of other hits would follow. Along with the previous mentioned hits, she continued to dominate both the clubs, streets and radio levels,  flawlessly with "Love Is On Her Mind", "Boy I've Been Told", "Love At First Sight", "One Day (I Am Going To Make It) and her ballad "Thinking Of You".

It would be the string of hits that all held longevity that would turn her into a legend, besides the fact that she was already one of the first ladies of Freestyle along side Judy Torres, The Cover Girls and many others. But Safire’s contributions did not end there. She was one of the first Latin HipHop artists to spawn Freestyle music videos. The videos would be of "Let Me Be The One", which helped cultivate and express a certain style and helped Freestyle develop an image. This was achieved with many different angle shots and artistic direction.

Another video would be "One day (I Am Going To Make It), which captures many angles of street life and outside shots. The song would serve as an inspiration to many young kids with a message of "yearning for success" , as Safire sang her experiences. And another video would be of her ballad "Thinking Of You", who obtained a long artistic shot of Safire. It simply just had a camera shot of Safire singing on a stage. "Thinking Of You" was a ballad with a somber theme of "loss by death". It was said that the ballad held a theme expressing the results of Aids. Whether or not that is the case, with the growing awareness of Aids, the song would be used in campaigns fighting Aids across the country. In time "Thinking Of You" would find itself crossing over to the adult contemporary markets as well as top 40 radio stations.  These videos gave Safire, as an artist, the exposure she needed. Not only as a "Freestyle" artist, but also as a professional vocalist and a person who served as a role model and contributed to society’s needs.

"Taste The Bass" would play an important part in Safire’s career as well as Freestyle’s musical history. As the 80’s came to a close and the 90’s gave way to House music, "Taste The Bass" would be Safire’s attempt towards a House record. It would put her on the spot light once more, as the record also helped and defined the bridge that was being used to transcend all those crossing from the Freestyle world to the House world. This record, like 2 In A Room’s "Wiggle It" or India’s "Right From The Start" & "The Lover Who Rocks You", would define the Latin HipHop/House sound. At times many would compare Safire to India, in the sense of the similarities in their musical direction. Indeed, "Taste The Bass" was a cut produced by David Morales (now Grammy nominated), as where rap vocal arrangements were done by Seduction’s, Michelle Visage. Michelle Visage was also found working on another Latin HipHop/House record, TKA’s "Crash", where Safire’s vocals were sampled and used on the breakdown on that record. That was then and this is now, 1998. Safire, like many of Freestyles earliest pioneers, took time to build a life. Since then she has grown into one of the industry’s professional women. Within time her skills have developed and she is once more behind the mic. Unlike many that have attempted comebacks, Safire is in the process of continuing to further evolve the music, as well as her recording career. Like many other artists who have branched out in different markets and musical styles, she has also done the same. But unlike many of them, she is presently working in or near the Freestyle arena, as she boast her roots proudly. She is still making noise with her re-release of "You Said You Loved Me", a song written by Mark Anthony back when he wrote and sang back ups on a lot of her earlier material. "You Said You Loved Me" was also featured on Sal Abbatiello’s "Freestyle Lives" compilation on Fever records. As if working on one project was not frustrating enough, while still with one foot in the Freestyle scene, through many connections and a helping hand from buddy David Maldonado Safire has launched into the Salsa world with her album "Atrevida". Here is where she adds to  the list of artist that took the salsa route like Mark Anthony, India, Brenda K Star, Coro, Lissete Melendez, Crissy I-eece, Luis Demon, Willy Crespo, etc. It is in this album that she sings a Salsa duet with George Lamond on the cut "Valiente". The song "Valiente" describes a woman’s view of a relationship with a machista boy friend. But this album is not just another album containing Salsa or used as tool to bring in and introduce to the world a up and coming Salsa star (George "Lamond" Garcia). 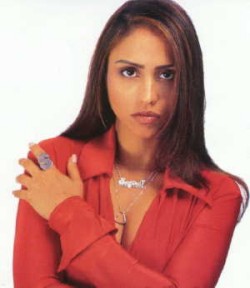 On this Salsa album she also throws down some Spanish R&B cuts as well as flexing her vocal skills on interludes, as she flaunts her strong street roots (Read: Hiphop) as well as the people behind her.

Indeed, the album dedicated to her father Angelo Cosme holds the sole element, that when combined, creates the Latin HipHop structure. HipHop and Salsa. On this album it can be said that elements of both styles are on the cutting edge.

Now on her husband’s (Kenny Diaz) label Hashboy, Safire has proven herself as a vocalist and artist to the standards of those who say they recognize "Real" music, while she still performs to sold out crowds across the country, singing all her Freestyle hits. Now with the Spanish album out of the way, Safire is currently in the process of building "a bomb", her English album. Here she will be "Freestyling" her flavors with a mixture of elements spawning from Afro Latin, HipHop, Dance among others. The project will hopefully capture all the best of what Safire is all about. A past Latin HipHop icon introduced to a new generation. For years many have heard of the artist known as Safire, but haven’t known or felt her flavor in person. In 98, the year of Freestyles fate, Safire has re-ignited. She has come to take away the chance from all those who failed to make the people dance. Safire has been an inspiration for many other artists and singers, not only in Freestyle, but also in all Dance music. For many years Safire has stood as a strong figure of Latin Hiphop, as an icon she remains pure. A figure of what used to be and what could be once more. It would be no surprise to see a whole new generation keep Safire burning.

Back To Interviews & Profiles